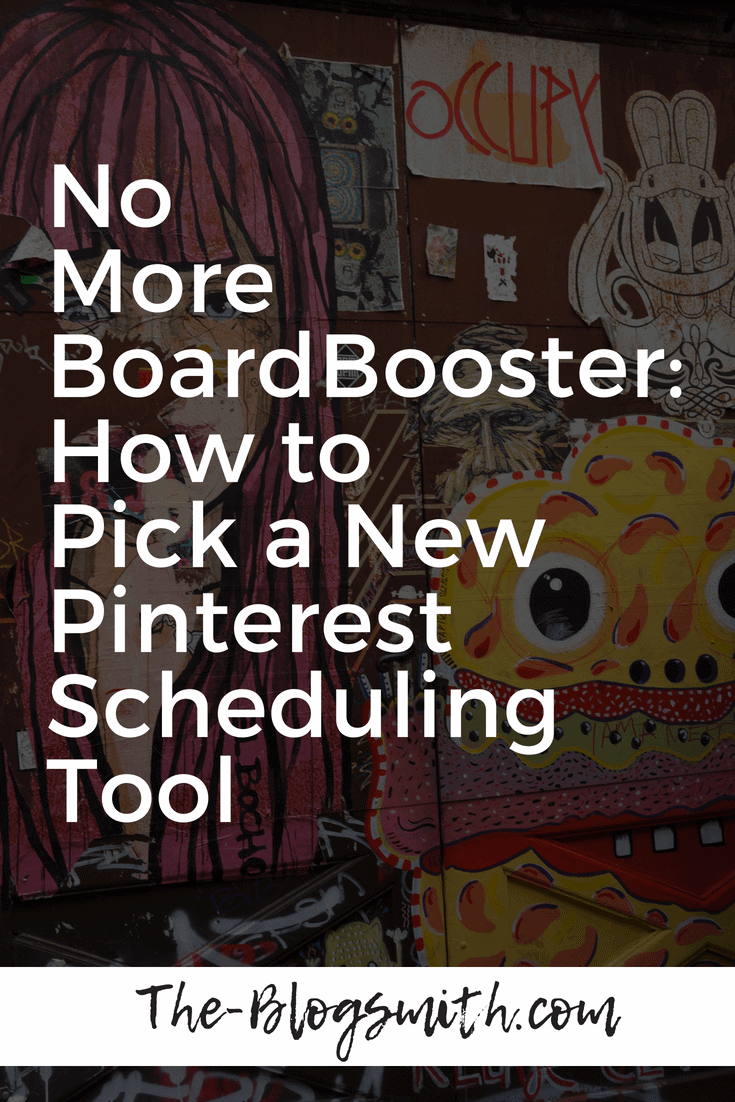 If you do any sort of Pinterest marketing, you’ve probably heard of BoardBooster.c

For many years (four, per their shut down email shared later in this article), BoardBooster was neck and neck with Tailwind as the best Pinterest marketing companion tool. New users could fully test BoardBooster with a free trial, then pick a paid plan starting at $5 for 500 pins per month. It was easy and affordable for new bloggers to get started with BoardBooster and scale their plan up as their blogs grew.

Today, the conversation surrounding BoardBooster vs Tailwind is no longer about which to choose but about the need to adapt from one platform to another.

But first, a personal story about how I’ve been using Pinterest marketing for brand building:

To be 100% transparent, I haven’t been giving Pinterest the attention it deserves as an awesome marketing platform for my brands and all the content I create until this year.

But the results are definitely there. Using my Pinterest SEO strategy and a lot of late night pinning while we watch TV, my boyfriend has successfully grown the Pinterest account for our ecommerce brand, Tanks that Get Around.

Only a few months into a consistent strategy (built on a solid foundation of keyword research), we’re achieving major reach: over 355,000 monthly viewers! 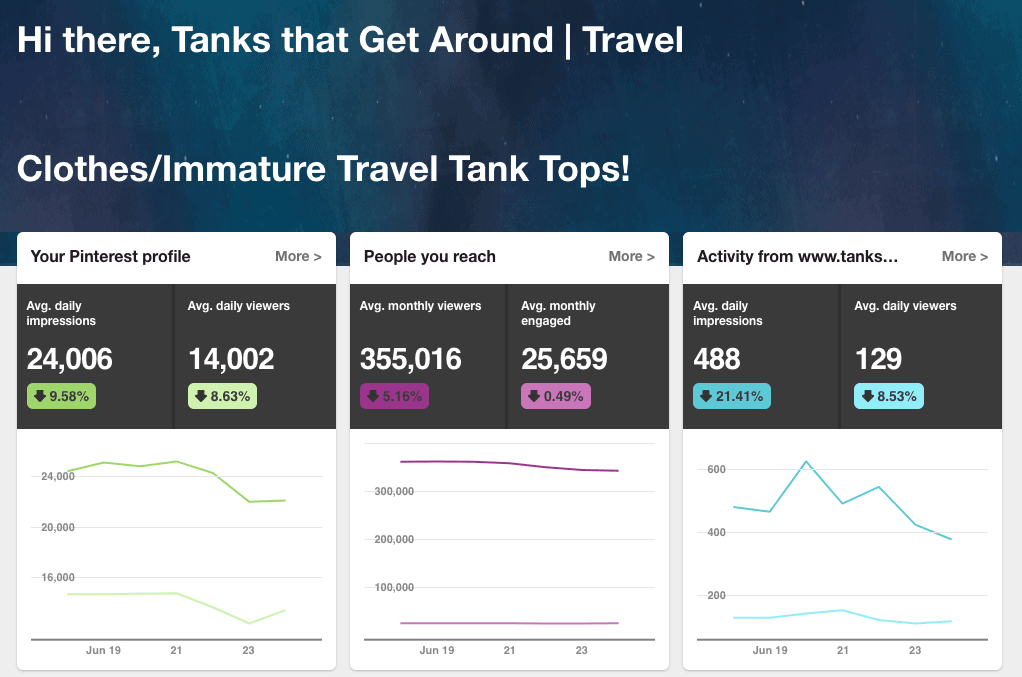 To be sure, some of this success relates to the use of tools like BoardBooster. Unfortunately, this tool is no longer viable.

Here’s what happened with BoardBooster.

Why BoardBooster Shut Down

BoardBooster sent out this official email announcing the end of their company on June 25, 2018: 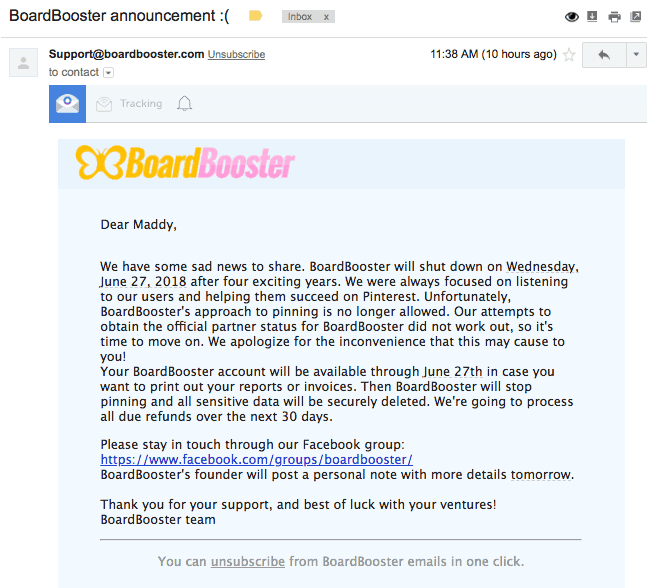 To their credit, BoardBooster has already processed my refund for the most recent month and I appreciate that it wasn’t a hassle.

But I can’t say I was surprised by their email.

That’s because less than a week ago, I got this email from Pinterest about my personal use of BoardBooster: 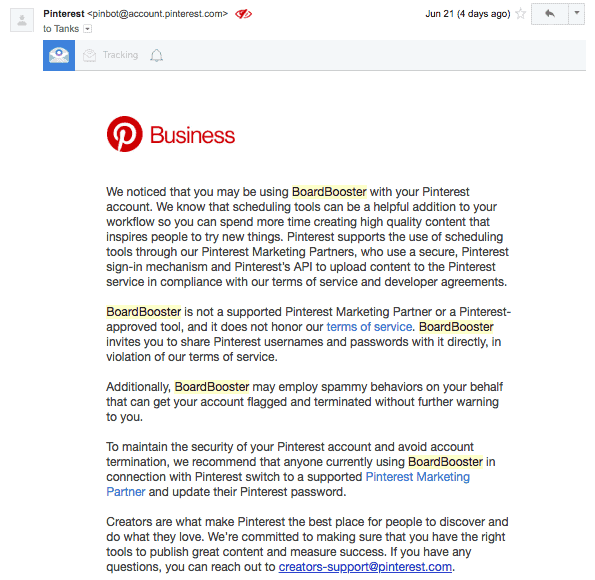 According to Pinterest, BoardBooster isn’t a viable Pinterest scheduling tool because of how they process your login info in addition to what Pinterest refers to “spammy behaviors” (supposedly in reference to their automation tools).

To be clear, this email from Pinterest is a warning that clearly advises “Don’t use this tool”.

Unlike many other software tools whose proprietors think they can stand up to the legal departments of large platforms like Pinterest, BoardBooster pre-empted users who might consider venturing into grey area by making things simple and just shutting down.

With BoardBooster no longer an option, it’s imperative to find a replacement. The sooner you take the time to demo different tools and familiarize yourself with their features, the less of an interruption there will be to your Pinterest marketing growth.

The closest similar competitor is Tailwind, so I’ll focus mostly on BoardBooster vs Tailwind when it comes to making suggestions. That said, there are certainly other Pinterest scheduling tools on the market that may be useful to you:

Good news first: if you’re using paid Buffer and Hootsuite plans for your social media scheduling, you already have access to a basic Pinterest scheduling tool.

Update 7/24/18: Sprout Social just announced that they support Pinterest scheduling on their platform. They are recognized as an official Pinterest Marketing Partner, so you can use their tool without worrying about the potential for it shutting down your account.

While asking other bloggers what tools they’ll be using in light of the BoardBooster shut down, I saw ViralTag come up a few times.

ViralTag offers basic Pinterest scheduling functionality in addition to analytics about optimal posting times and an interesting Canva integration for editing pin images. That’s about all I care to know about ViralTag for two reasons:

Regarding my second point, you’ll recall that BoardBooster never became an approved Pinterest marketing partner, which eventually led to their shutdown.

And finally, it’s time to talk about the golden child of Pinterest scheduling tools: Tailwind.

Let’s begin the BoardBooster vs Tailwind comparison by focusing on first impressions of the UI. 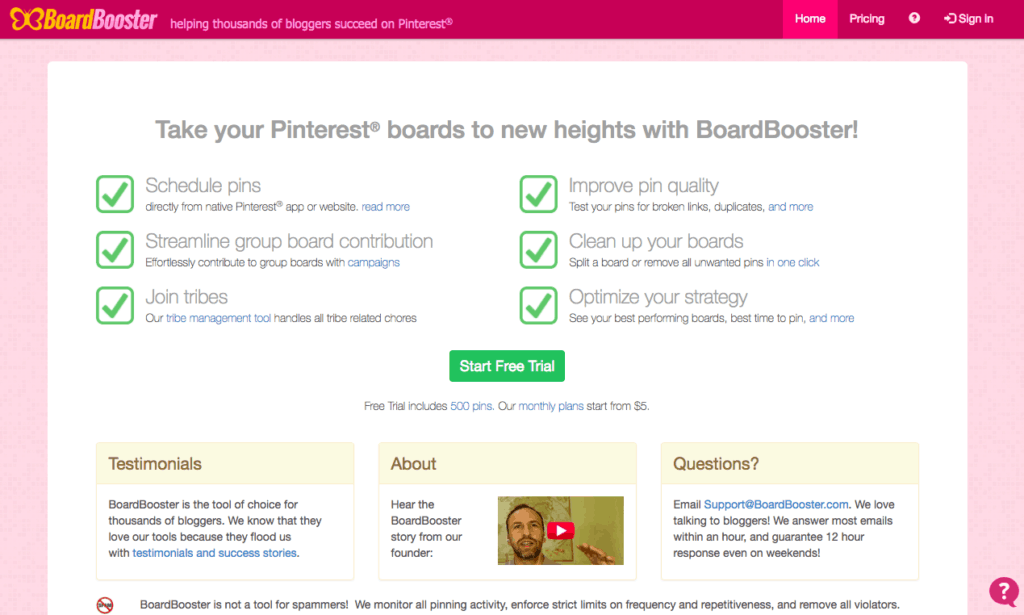 Tailwind, on the other hand, is gorgeous. 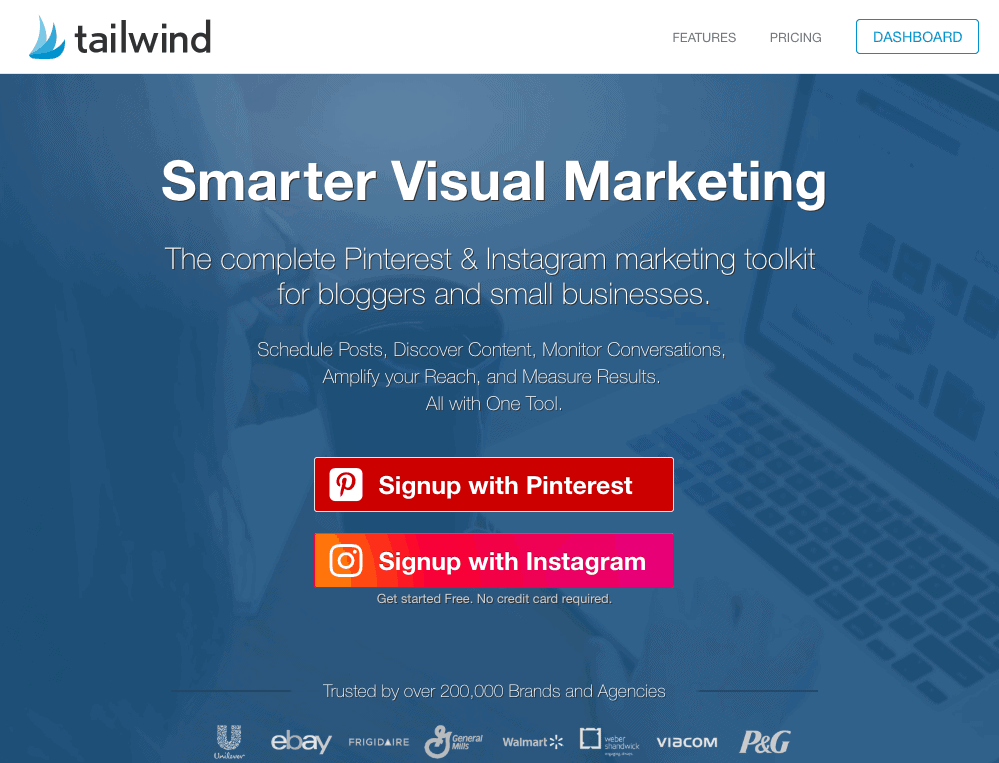 Just look at this dashboard: 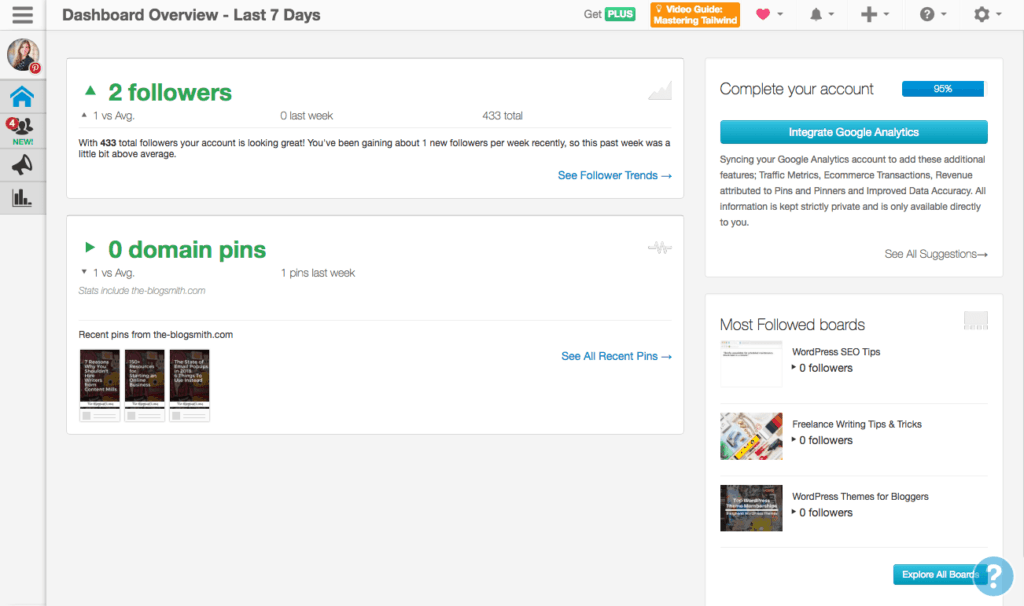 It’s probably fair to say that when it comes to BoardBooster vs Tailwind, Tailwind wins from a user experience standpoint. And since Pinterest marketing is so inherently visual, this is an important battle to win.

When discussing BoardBooster vs Tailwind, it’s also worth noting that BoardBooster is all about Pinterest, whereas Tailwind also offers Instagram management tools.

If you focus mainly on Pinterest and Instagram for your social media marketing efforts, this could be your perfect all-in-one tool and analytics dashboard! Of course, Buffer and Hootsuite reign as the best all-in-one tools for those who use Pinterest—at least from a pure scheduling standpoint.

The main point of contention between BoardBooster vs Tailwind? The fact that BoardBooster never got Pinterest’s official nod of approval. Rest assured knowing that Tailwind is an approved Pinterest marketing partner—meaning that using this tool will never flag your account as spammy.

BoardBooster Looping: Is There a Comparable Tailwind Feature?

While exploring the differences between Pinterest scheduling tools, I found myself wondering if there were any comparisons between BoardBooster vs Tailwind in terms of BoardBooster’s famous looping feature.

I assumed that Pinterest’s email to me referencing BoardBooster’s “spammy behavior” was about this particular feature.

But it must not be, as Tailwind, an official Pinterest partner, is launching their own looping feature: 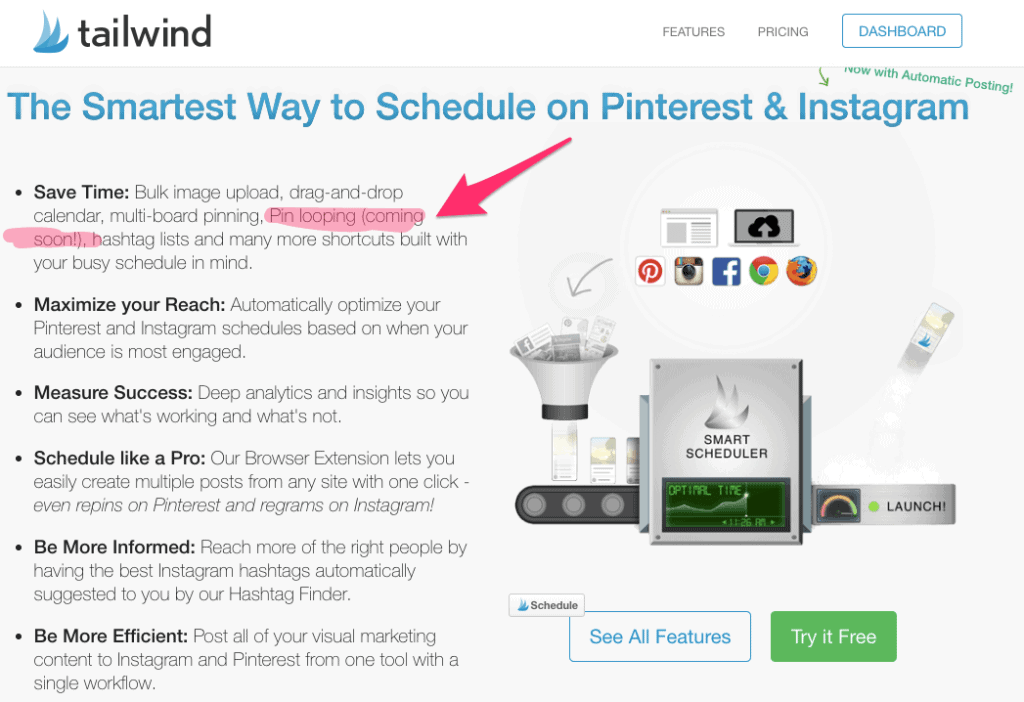 New users can reserve their spot to get early access by answering a few questions via this form. While you wait for approval, Seaside Sundays offers a functional workaround for “looping” on TailWind.

An interesting and unique feature of Tailwind is the ability to join Tribes. Tribes follow a concept similar to that of Pinterest group boards, in that they bring together like-minded people (or at least people who have a shared interest in certain topics).

Everyone who participates in a Tribe is expected to give at least as much as they get. An associated metrics dashboard helps members to understand who’s being a good Tribe member and who isn’t participating in a way that benefits other group members. 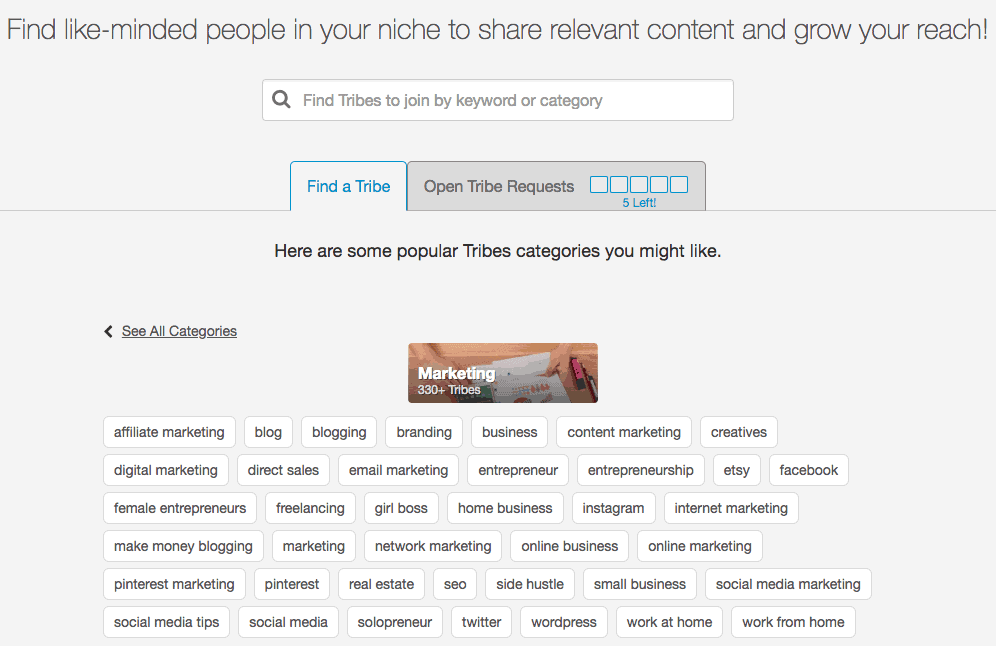 I’ve been exploring Tribes loosely related to digital marketing and there aren’t many Tribes that I’ve noticed with huge memberships but I’m expecting them to grow in line with the mass exodus of users as a result of BoardBooster shutting down.

Comparing Tailwind vs BoardBooster, you might expect to be charged based on a number of pins. Not so with Tailwind: it’s a flat monthly rate of $9.99 for unlimited pins.

Side note: why is it so hard to find a good “Praise be” GIF?

Better yet, you can try before you buy with a free trial based on number of pins, not days. There’s no pressure to jump in right away but I’d recommend signing up for an account now to lock in your pricing. Who’s to say that it won’t go up with Tailwind’s biggest competitor no longer in the game?

On a final note, comparing BoardBooster vs Tailwind is kind of a no-brainer, since BoardBooster is no longer viable. But compared to other scheduling tools that work with Pinterest, it’s still the champion.

To be sure, Pinterest doesn’t love when you use scheduling tools at all, so whatever you choose to help you with this task has to do double duty to make your efforts worth it. Tailwind delivers in terms of features and pricing.

If you’re just getting started with Pinterest marketing, you’ll benefit from having someone guide you through the process.

I have two resources for you based on content that I’ve created:

If you don’t have time to dive in but do want some help setting up and running your Pinterest SEO strategy, get in touch!

Unlike other popular social platforms, Pinterest really doesn’t change too often. This means that even small changes can have far-reaching effects.

The fundamental change to Pinterest automation that came as a result of BoardBooster’s shut down will certainly slow down those who can’t adapt. So get with the picture and start learning how to use Tailwind. Before you know it, you’ll be back in business, rocking Pinterest.

Are you considering any other Pinterest scheduling tools in light of BoardBooster’s shut down? Let me know how you’re dealing with these changes in the comments!

There are no comments 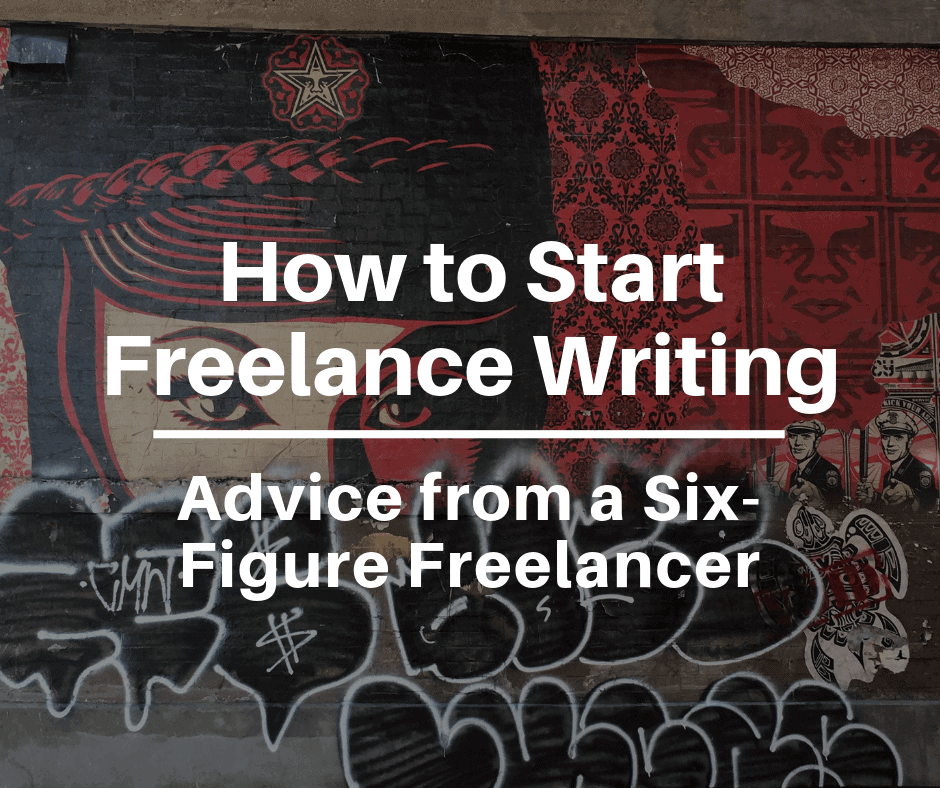 How to Start Freelance Writing: Advice From a Six-Figure Freelancer

I’ve been freelancing since my early college days. It all… 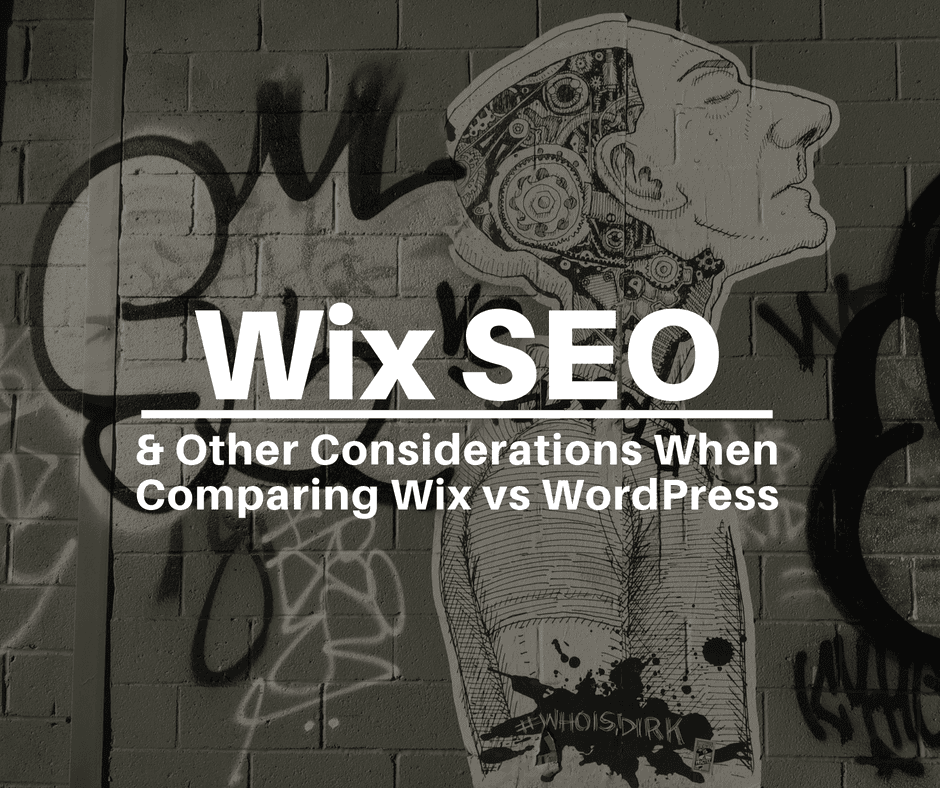 Wix SEO & Other Considerations When Comparing Wix vs WordPress

Wix SEO has improved greatly in recent years. Here’s what… 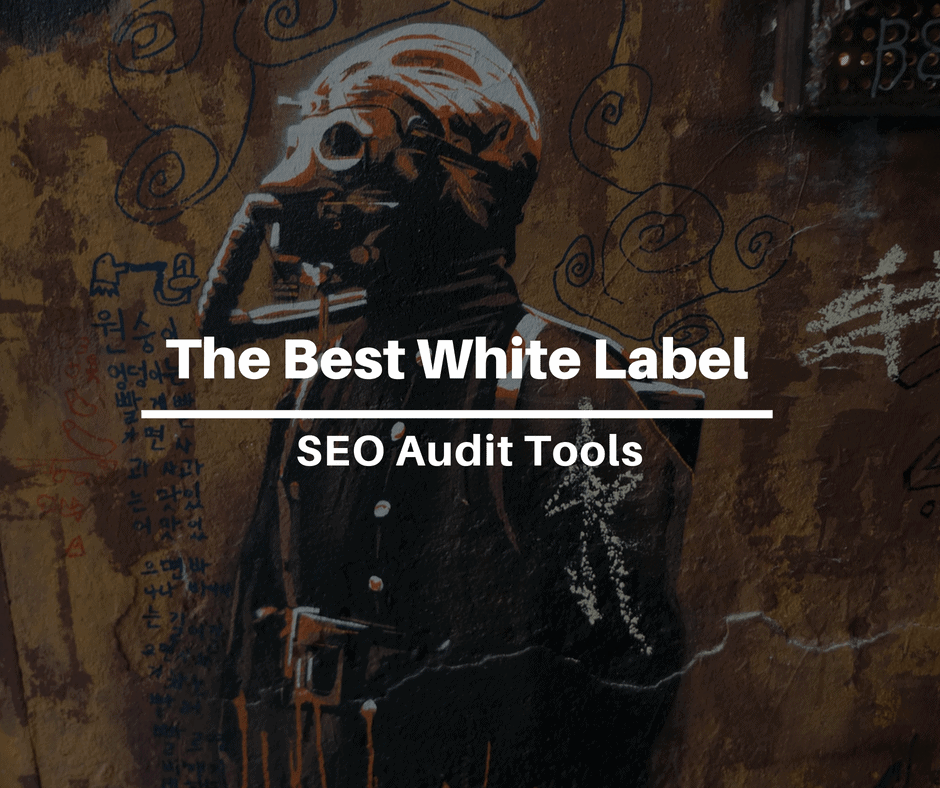 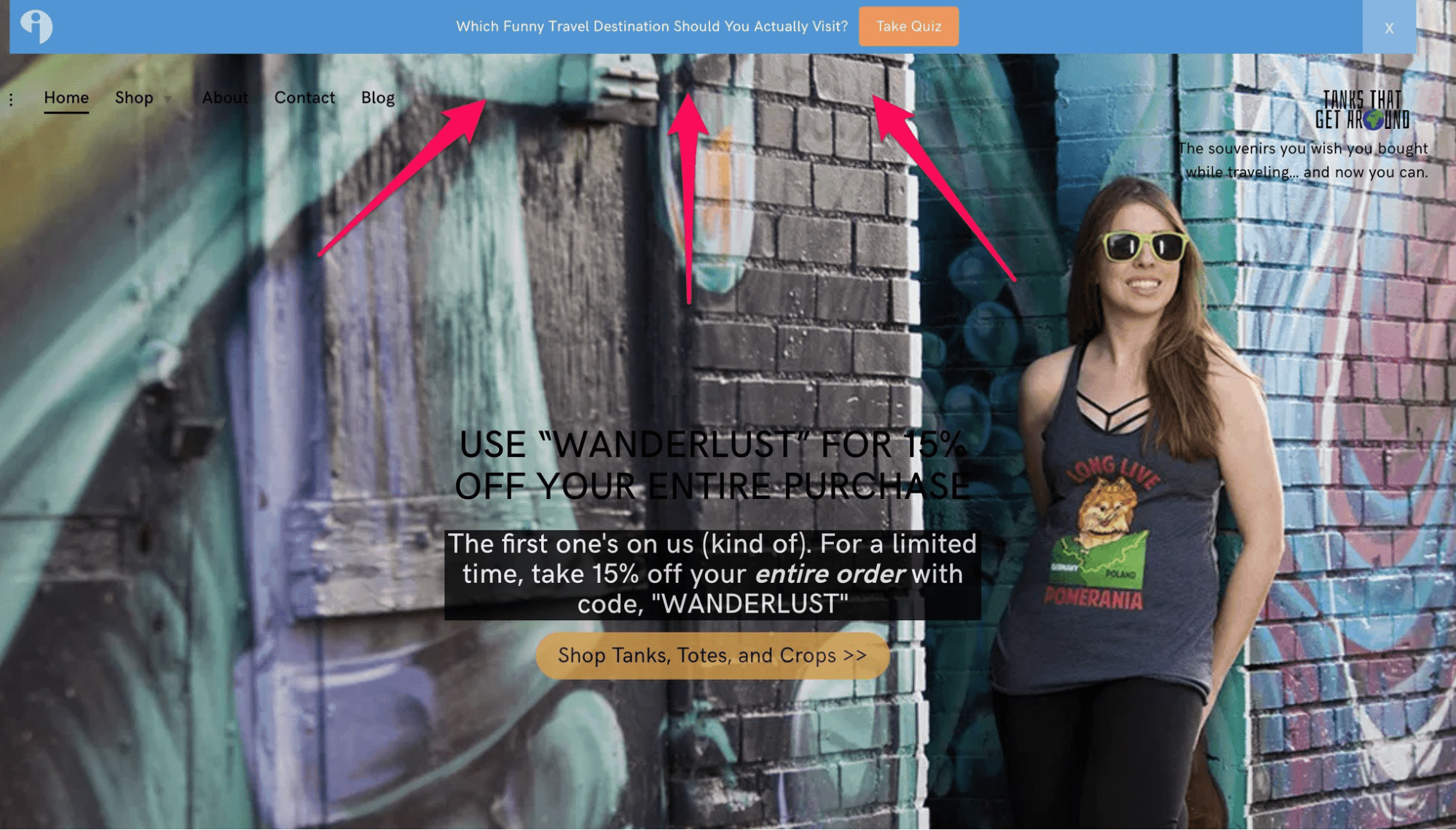 7 Reasons Why You Shouldn’t Hire Writers from Content Mills

by Maddy Osman
Posted on May 26, 2018July 26, 2019
Posted in FeaturedSEO/Content MarketingWordPress